Angular ball bearings are also called angular contact radial thrust ball bearings. This type of bearing is particularly suitable for carrying combined loads (radial and axial load) as well as pure axial loads and can be operated at relatively high speeds. The axial load carrying capacity of angular contact ball bearings changes along with dimensions of contact angle. The larger the contact angle, the better the axial load carrying capacity is. The contact angle α is defined as the angle between the line joining the contact points of the ball and the raceways in the radial plane, along which the load is transmitted from one raceway to another, and a line perpendicular to the bearing axis. The allowable angle error of a single row contact ball bearing is limited. The angle errors of inner ring and outer ring are dependent on radial clearance, bearing dimension, internal structure, and the force or moment acting on bearings. The relationship of those factors is so complicated that an accurate value can’t be provided at present. When the clearance of paired mounting angular contact ball bearings (or double-row angular contact ball bearing), especially of those arranged back to back, is respectively small, οnce angular errors are made between the inner ring and outer ring, balls and cages would carry more additional load, and the bearing life would also be shortened. Any angular error would cause noise. This type of bearings are mainly used in machine spindle, gearbox, reducer and supercharger etc. 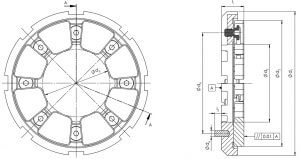