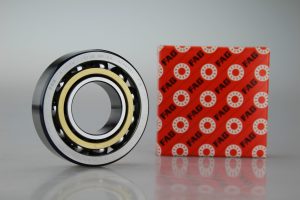 Schaeffler Technologies AG & Co. KG (also known as Schaeffler Group respectively Schaeffler Gruppe in German) is a manufacturer of rolling element bearings for automotive, aerospace and industrial uses before October 9, 2015, IPO in Germany. It was founded in 1946 by brothers Dr. Wilhelm and Dr.-Ing. E. h. Georg Schaeffler. In August 2008 the firm agreed to a staggered €12 billion acquisition of larger rival Continental AG, whereby Schaeffler would defer taking a majority stake until at least 2012. However, in 2011 Schaeffler sold off €1.8 billion worth of shares of Continental, reducing its stake from 75.1% to 60.3%. Currently, the company owns 46% of Continental shares. Schaeffler Group also owns the brands INA, FAG, and LuK. During the merger, the company revealed that in World War II it had exploited thousands of slave laborers in its plants in German-occupied Poland. Around this time the director of the museum now standing at the site of the Auschwitz concentration camp claimed that after the war 1.95 long tons (1,980 kg) of human hair had been found at Schaeffler factories, and had been used in upholstery in its automotive products. The historian at Schaeffler denied this particular allegation.

In Germany, the main brands of the Schaeffler Group – INA, FAG and LuK – are marketed by Schaeffler Technologies AG & Co. KG and LuK GmbH & Co. oHG.